We are sorry,
this movie is not available
in your country
AVAILABLE TO VIEW FOR ANOTHER 35 days


This film, shot on St. Peter’s Island on the banks of Lake Biel, is in the form of an interview between Philippe Lacoue-Labarthe and Jean-Christophe Bailly. It’s about friendship, philosophy, prose, music, the sacred, the poet Hölderlin and Rousseau and the critical conscience.


“One could say that the essence of your research, your intention as a thinker, is the place – which is difficult to situate – where poetry and philosophy meet.”
This is how Jean-Christophe Bailly introduces these interviews with Philippe Lacoue-Labarthe conducted in 2003 on St. Peter’s Island, in the footsteps of Jean-Jacques Rousseau. Author of around twenty books, Philippe Lacoue-Labarthe wrote about people such as Wagner, Heidegger, Nietzsche, Hölderlin, Blanchot, and Celan, thus ranging between poetry, philosophy, theatre and music.
The discussions that Christine Baudillon and François Lagarde offer us here are marked by the seal of friendship; “Lacoue’s” friendship with the two filmmakers, with whom he worked several times, and an older friendship still, an essential friendship with Jean-Christophe Bailly.
It’s more than just a question of elective affinities between the two men. There is, during these interviews – that take time to let thoughts form and formulate, to head towards wherever each man requires them to head – the expression of a “communism of minds” that conjures up early German romanticism whose influence was decisive for these two authors. 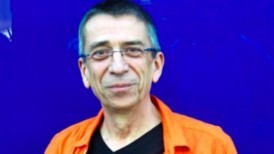 François Lagarde was a photographer, editor and director who was born in Nimes in 1949 and died in Montpellier in 2017. His portraits of artists were also pretexts to meet the authors he admired such as Denis Roche, Brion Gysin, William S. Burroughs, Ernst Jünger, and Albert Hofmann. In the 1990s, the friendship he forged with Philippe Lacoue-Labarthe determined the philosophical orientation of his films. In 1999, he set up the Hors Œil Éditions company with Christine Baudillon and Lionel Broye, focusing on digital productions, CD-ROM s and DVD books devoted to portraits of philosophers and artists. Lagarde taught Photography and New Media at Fine Art Schools in Nimes, Marseille and Avignon.

Christine Baudillon is a filmmaker living in Montpellier. She has made several films about musicians in the field of free improvisation. Her portrait of the pianist Siegfried Kessler was followed by one of double bass player Joëlle Léandre, saxophonist Daunik Lazro and her latest, about Raymond Boni, the guitarist and harmonica player. She then went on to shoot “Animal pensivité”, a cinematographic essay. In 2018, she accompanied the posthumous film by François Lagarde, “Le Rouge et le Gris, Ernst Jünger dans la Grande Guerre”, which she edited, and she is now trying to get another Lagarde film, “Alexandre Kojève, en connaissance de cause” to see the light of day.