We are sorry,
this movie is not available
in your country
AVAILABLE TO VIEW FOR ANOTHER 5 days


Born in 1928, Edouard Glissant is the author of numerous collections of poetry. In the tropical night, in his house in Le Diamant in the south of Martinique, he responds like the old Creole storytellers to the questions of his friend, the writer Patrick Chamoiseau.


"I write with words dug up at night," says Édouard Glissant. Jean-Noël Cristiani takes him at his word as he shoots his film at home, on the ocean's edge, in the darkness of the tropical night, full of sound and presence. The dialogue, interspersed with readings and powerful poetic images of Glissant (the hold, the deep blue of the sea, the night, the magician of the herds), deals with "the historical wound", "the experience of the abyss" which, since the slave trade and slavery, has marked the West Indian imagery. Glissant insists, it is impossible to know what happened before deportation, impossible to go back to the source of things. He sees in it a paradoxical, tragic and unlimited splendor. The impotence of historical knowledge and the immense task the poet takes on: to give an image to "the before". 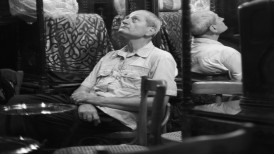 Jean-Noël Cristiani studied philosophy and cinema at Paris X, notably with Jean Rouch. His first feature film, "Le Silence des organes", was released in 1976. Since then, he has been directing documentary films. In 1980 he participated in the creation of the Ateliers Varan and led several workshops in Romania, Georgia, Serbia, Kenya and Egypt. In 2010, he created the workshop in Ajaccio, Corsica, which has been held every year since. His work alternates with films on particle physics with films on musicians such as Max Roach, or writers such as Karen Blixen, Mika Waltari, Edouard Glissant, Maurice Chappaz... In 1987, after a short film on "Une exposition de Soulages" the painter asked the filmmaker to accompany the creation of the stained glass windows of Conques Abbey. The shooting of this film lasted seven years. Awarded several times internationally, "Les Vitraux de Soulages" is followed by other films with the painter. His recent film "Le Marcheur" shows the images that come while walking. He continues to explore this area with sketches of Turner's hikes. 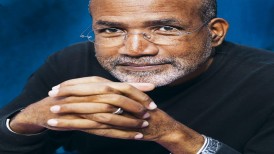 Patrick Chamoiseau was born on December 3rd 1953 in Fort-de-France (Martinique). After studying law and social economy in France, he became a social worker, first in France, then in Martinique. Inspired by ethnography, he became interested in the disappearing cultural forms of his native island (the djobeurs of the market of Fort-de-France, and the old storytellers) and he rediscovered the dynamism of his first language, Creole, a language he had to abandon during his primary education. In 1986 he published his first novel. In 1992, his third novel, "Texaco", received the Goncourt prize.