We are sorry,
this movie is not available
in your country
AVAILABLE TO VIEW FOR ANOTHER 33 days


As a stutterer, I document my tragi-comic attempts to achieve a certain fluidity on a daily basis. With family, loved ones, strangers, the world is stuttering and me with it. Investigating the causes of this twisted relationship to speech, I dive into the abundant knowledge related to stuttering, explore my throat, my brain, my family history, experimenting different ways of being in an attempt to become someone else. A burlesque journey, where everyone seems to believe that being "fluid" necessarily involves accepting your blockages.


In this daring short film, the director, in order to get rid of his stutter, sets himself a series of challenges. He doesn't hesitate to give of his person, putting himself out there and trying to tame this inner turmoil. The provoked situations, each one more comical than the other, lead him to expose himself with a lot of sincerity and self-mockery. Not without a certain hindsight, he walks, gropes, questions himself with his partner who become’s a privileged interlocutor. It is with great accuracy and humility that the film is built before our eyes and reveals the meanders of a journey towards a much sought-after liberation. This documentary bears witness to a daily struggle, that of the director but also that of those who, like him, find themselves hostages in their own bodies. 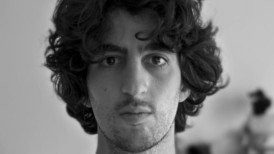 After studying literature and philosophy, Anne Paschetta trained in documentary writing, taking a course at the INA and working as co-author with Namir Abdel Messeeh for his first feature-length documentary “La Vierge, les Coptes et Moi”. For a decade or so, she has been working with several directors and has co-written six feature-length documentaries released in cinemas (five of them granted an advance on earnings), “La Vierge, les Coptes et Moi” by Namir Abdel Messeeh, Guillaume Kozakieviecz’ “Salto Mortale”, “À Ciel Ouvert” by Mariana Otero, Jean-Gabriel Périot’s “Une Jeunesse Allemande”, Alain Ughetto’s next feature-length animation “Mano d'Opera” and Simone Massi’s “Trois Enfances”. She also writes documentaries for television, including the recent “Lumières sur la Ville” by Agnès Bovet (Arte), and Tanguy Le Cras’ “Je Ne Veux Pas Etre Paysan” (France 3 Régions and l’heure D), awarded an Étoile de la SCAM in 2019. Paschetta is committed to sharing her experience and accompanying new authors, and has been advising on documentary writing projects at Vidéadoc since 2010 as well as running workshops and writing residences at Ty Films, Ciclic and Lussas.

Other films in the collection: Temps présent