We are sorry,
this movie is not available
in your country
AVAILABLE TO VIEW FOR ANOTHER 45 days


A temple in the heart of the Peloponnese – a challenge from the past for future.


Here we have an archaeological site filmed with slow, precise tracking shots that bring us face to face with the stones. There are no explanations, just the dialogue between the voice and the insects, the columns like trees, time that seems suspended, and an unabashedly poetic style. A traditional and emphatic commentary, which – at first, at least – we think is from the director, makes us see the vanity of any endeavour… archaeology, building a temple, ceremonies or even filmmaking, as though predicting our future absence. “Everything will return to mud and ashes”.
On Saturday 20th June 2020 it was 38°C in Verkhoyansk in the Arctic Circle – as though heralding humanity’s imminent demise… 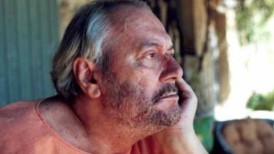 Jean-Daniel Pollet (1936-2004) was a French director, scriptwriter and producer. Starting out a as an assistant director, he released his first film “Pourvu qu’on ait l’ivresse” in 1958, which led to his meeting Claude Mekli, his favourite actor, and brought him irrefutable recognition. This short film was the first in a series of movies starring Mekli’s character Léon, and representing one of Pollet’s two cinematic dimensions – a taste for popular comedy tinged with both burlesque and melancholy. In the same vein is the segment “Rue Saint-Denis” from the “Paris vu par…” anthology, as well as the feature films “L'amour c'est gai, l'amour c'est triste” and “L'Acrobate”. The second vein of Pollet’s cinema began with “Méditerranée”, filmed over two years in the company of Volker Schlöndorff. Pollet was trying to create a totally poetic cinema. He succeeded, partly thanks the quality of the authors such as Philippe Sollers and Jean Thibaudeau who wrote his films’ commentaries. In April 1989, he had a serious accident. He shot his final films from his home in Cadenet – “Dieu sait quoi” (1994), “Ceux d’en face” (2001) and “Jour après jour”, which was completed by Jean-Paul Fargier in 2006.

In the Land of Head Hunters