Your order has been taken into account, you can watch Letter for a duration of 48 hours from the date of your payment. 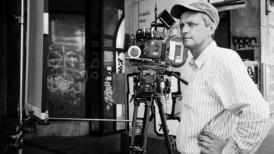 Sergueï Loznitsa, born in 1964 in Belo-Russia (at the time in the USSR), is a Ukrainian director whose documentary work is sometimes on the edge of the experimental. He is a scientist, a specialist in artificial intelligence and a translator of Japanese. After this professional life, Sergueï Loznitsa decided to change his life and went to Moscow to train at the National Institute of Cinematography (VGIK), from which he graduated in 1997. In 2001, he moved with his family to Germany. He has directed 18 documentaries that have won awards at international festivals. His two feature films, "My Joy" (2010) and "Dans la Brume" (2012) were selected at the Cannes Film Festival. In 2014, he shot "Maidan" during the Ukrainian revolution (screened in Cannes). In 2015, "L'Evénement" is presented in Venice. His 2016 documentary, "Austerlitz", follows the journey of tourists in the concentration camps. He then directed two documentaries, "Victory Day" and "The Trial" and a fiction, "Donbass" (Best Director Award at Un Certain Regard). His latest film, "State Funeral", premiered in Venice.

Other films in the collection: Listen