We are sorry,
this movie is not available
in your country
Movie no more available
More informations on FILM-DOCUMENTAIRE.FR and on VAD.CNC.FR
Highlights 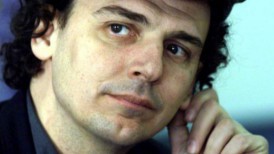 Born in Barcelona in 1960, José Luis Guerín is a quirky, unpredictable and self-taught director with many feathers in his cap. “Since I never went to film school, my only training has been as an audience, so I’ve acquired an imagination peopled with filmmakers who’ve helped me discover the world”, he claims. For most of his films, he plays the role of scriptwriter, producer, editor and director of photography. He made his first feature, “Los Motivos de Berta” in 1984. Since then, he has alternated between documentaries and fiction. In 2000, “En Construccion”, which describes peoples’ lives through the construction of a building in Barcelona, met with huge success. This was followed by “Dans la ville de Sylvia” (2007), selected at Venice, and “Unas fotos en la ciudad de Sylvia” (2007). In 2010, his documentary “Guest” was presented at Venice. He co-directed “Correspondencia Jonas Mekas - J.L. Guerin” with Mekas in 2011 and the same year, made “Recuerdos de una mañana”. “L’Académie des muses” was presented in the Signs of Life section at Locarno in 2015.