We are sorry,
this movie is not available
in your country
AVAILABLE TO VIEW FOR ANOTHER 70 days

Do You Know Akane Okai?


"Nihongo shabere masen, demo nanika ohanashi kikasete kudasai?: I don’t speak japanese but can you tell me a story?" From one person to another talking in JapEnglish the author is looking for a protagonist. He finally meets Akane Okai. And you, do you know Akane Okai?


We have here a scruffy, cheerful, documentary hunt!
It feels as though we pick up the film that’s already on its way, and follow its pace of a slightly (very) lost mad dog, then watch it take its time, suspicious of its interest in a young face.
“Les Dimanches avec Traute” was a triumph of the spoken word; “Do You Know Akane Okai” goes from a film in the process of being made and the failure of words to the attempt to exhaust someone. Akane is definitely exhausted from being followed… the character suddenly leaves us behind, alongside the director.
11 minutes of incomprehension, shrewd editing, awkward smiles, characters that fob off the young Westerner, sharing a bed-and-breakfast, a little arts & crafts and some ping pong.
Rather than hunting, this is about running away. 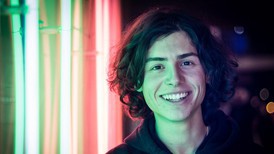 Born in 1993, Raphaël Harari studied in Geneva. When not devoting his time to his respective passions for theatre and painting, he also started making short films as a teenager. At eighteen, his short film “L’Étrange échange” was selected for four festivals. In 2015, he graduated in Film Studies from the Geneva University of Art and Design (HEAD). Since then, he has worked as a director and painter, and made several short movies.

Other films in the collection: Graduation films from the HEAD