We are sorry,
this movie is not available
in your country
AVAILABLE TO VIEW FOR ANOTHER 40 days


Enzo has spent half his life in prison behind bars. The Sicilian gangster, a repeat offender, has nevertheless found love there as well as a form of salvation through poetry. In snatches, Pietro Marcello paints his portrait, like so many scraps of a broken life, along with a portrait of the underclass from Genoa’s Croce Bianca, Via Prè and Sottoripa neighbourhoods with their labyrinths of cut-throat backstreets. It’s also the tale of an extraordinary love story fuelled by the seemingly endless wait for a simple paradise where the lovers can at last make up for lost time.


“La Bocca del Lupo” is both a melancholy ode to a lost world and an affirmation of absolute artistic freedom. Fascinated by the inmate Enzo and his romantic love affair with Mary, Pietro Marcello fleshes out their personal tale with the evocative power of archive footage. The materiality of the image and sound repertoire (the tapes Mary recorded for Enzo in prison) becomes a tool to give the story back its dimension in time. Enzo’s face, the backstreets of the old town, archive footage and the music come together in dialogue thanks to skilful editing to construct a universe trapped in time, the time lost for the two protagonists who represent the “underclass” so dear to the director. Set against the prison of life and the limitations of Enzo’s and Mary’s scrawny bodies are the force of desire and their dream of a safe haven. 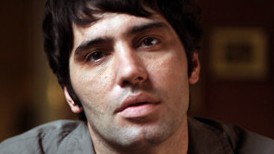 After studying painting at the Academy of Fine Arts, Pietro Marcello made his debut in 2000 as assistant director for the documentary "Gennarino" by Leonardo Di Costanzo and directed the short documentary film "La Baracca" (2005). In 2007 he shoots "Il passaggio della linea", a documentary shot at night on Italian express trains. In 2009 he directed the dramatic documentary "La Bocca del lupo", which won the Torino Film Festival and then the Nastro d'Argento, the David di Donatello for best documentary and the Vittorio De Seta prize at the Bif&st 2010 for best documentary. In 2011 he presents two documentaries at the Venice Film Festival: "Il silenzio di Pelešjan", about the avant-garde director Artavazd Pelechian, and "Marco Bellocchio, Venezia 2011", a short portrait of the director Marco Bellocchio. In 2015 Pietro Marcello presents the feature film "Bella e perduta" at the Locarno and Toronto festivals. In 2019 he directs his first feature film, a project he has been working on for a long time, "Martin Eden" - based on the novel by Jack London - which was presented in Venice (where actor Luca Marinelli received the Coppa Volpi) and in Toronto where it won the Platform Award".

Other films in the collection: Filmmaker in focus