We are sorry,
this movie is not available
in your country
AVAILABLE TO VIEW FOR ANOTHER 28 days


Shot at Carl Theodor Dreyer’s home in Copenhagen, this conversation recalls the characteristics of his filmmaking: long shots and the omnipresence of faces. The filmmaker offers us his reflections (in French!) on his relationship with actors, the art of cinema, and his research into editing and movement.


We enter into this film in the same way as we leave it, to sacred music. This is pure Dreyer, but immediately jostled by a touch of Godard that Rohmer uses whenever possible, where Anna Karina in “My Life to Live” weeps before Joan of Arc and reads expressively with her beauty and innocence as a silent actress. Gradually we enter Copenhagen, home to an austere great master. Janine Bazin and André Labarthe meet several collaborators and actors/actresses to draw closer to Dreyer, described as a man who’s calm, meticulous and taciturn. When the interview with the filmmaker begins, we discover his handsome face, concentrating on responding adequately, polite, speaking in French… The questions reveal the New Wave desire to manufacture masters of cinema. But Dreyer foils the attempt, driven only by the ambition of his art – to describe the follies, miracles and deadlocks of faith. “I use long shots so that we can understand what the actors are saying” is the only direct answer he manages to grant us. The “Master” figure that Labarthe tries to construct does not seem to touch Dreyer, preoccupied as he is with the audacious desire to converse with the Devil, the apostles, Calvin and Satan… 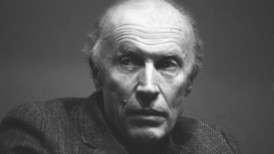 Other films in the collection: Filmmaker in focus

From the Other Side