Your order has been taken into account, you can watch The Silence of Green for a duration of 48 hours from the date of your payment.

The Silence of Green


Andreas Horvath's film takes a dramatic look at the effects of the 2001 foot and mouth outbreak in North Yorkshire. It questions why culling was used instead of vaccination to stop the disease spreading. Did the Labour government have a hidden agenda to decrease the number of English farmers?


“It comes from above”, says one of the people who talk to the filmmaker, and ‘above’ is represented by the Army, the Police, vets and teams of liquidators followed by mechanical diggers and trucks. The executors/those executing the law leave behind them landscapes devoid of any trace of the abundant herds of before. All that remains for the farmers, defenceless, despairing and dispossessed of their main livelihoods, is to trust in something ‘higher’ still – the Heavens. The director, kept at a distance by fences and barriers, captures the macabre spectacle, his camera trembling (in dread?). By subtly alternating bucolic images and scenes of abominable slaughter, and his mise en abyme with a painting by the Romantic landscape artist Constable and, sound-wise, the polyphony of voices and prayers converging in a tragic choir, Andreas Horvath bestows his film with a unique genre. It’s a requiem, a liturgy on modern times with an Agnus Dei that’s a very real animal sacrifice, but one without a glimmer of hope, or peace, or mercy. 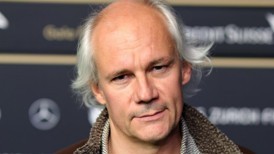 Andreas Horvath was born in Salzburg, Austria in 1968. He studied photography in Vienna and multimedia-art in Salzburg. As a freelance photographer and filmmaker he publishes photo books and creates independent films. Horvath´s documentaries have been selected in international film festivals such as Cinéma du Réel in Paris, Chicago International Documentary Film Festival, Karlovy Vary IFF or La Quinzaine des réalisateurs (Director's Fortnight) in Cannes. As a photographer Andreas Horvath published black and white photo albums about Yakutia, Siberia and rural America.

Other films in the collection: Essays

The Day of the Sparrow

Now He's Out in Public and Everyone Can See