We are sorry,
this movie is not available
in your country
AVAILABLE TO VIEW FOR ANOTHER 14 days


Back in the day when photography was analogical, it was customary to print the entire film, cut into bands, onto a single sheet of photographic paper. The prints obtained were called contact sheets and made it possible to choose the shots worth enlarging. They constitute the photographer’s notebook, rough copy, sketches, crossings out and regrets, and were not seen by common mortals.
William Klein, top notch filmmaker and photographer, imagines a disarmingly simple concept to introduce us to the photographer’s artistic approach; exposing to the light of day these famous contact sheets just by passing them before our eyes, described in voice-over by their author. It’s simple but powerful; the photograph is no longer this “one shot”, caught by “miraculous” chance, involving instead, hard work, shifting, hesitation and construction – it’s all about vision… 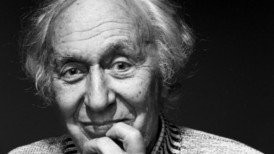 Other films in the collection: Escale photographie

If I had Four Dromedaries

The Photosopher, Instants With Frank Horvat