We are sorry,
this movie is not available
in your country
Movie no more available
More informations on VAD.CNC.FR
Brouillon d'un rêve


Ever since Jeanne Delafosse and Camille Plagne released La Tumultueuse Vie d'un Déflaté, the biting portrait of an ex-train driver from Burkina Faso, their follow-up film was hotly awaited. Here the filmmaker duo are seen back in full force in Ougadougou, still sending ripples, this time to depict Eugène, a young 'businessman'/troublemaker. Both films intertwine as milestones in a documentary film oeuvre that already stands out for its fictional scope. 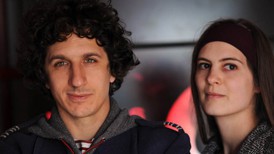 Other films in the collection: Brouillon d'un rêve

Brothers of the Night